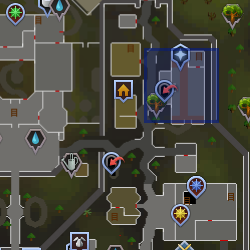 Gideon Bede is a Saradominist scholar and librarian from the monastery near Edgeville. He can be found at the church in Varrock and features in the Demon Slayer quest. Prior to the events of the quest, a powerful tome of demonology that could be used to summon the demon Delrith was taken from Gideon's library, by Denath, a mad wizard. Gideon has tracked Denath to Varrock and requests the adventurer's help in obtaining Silverlight, whilst he continues to search for Denath.

Once Silverlight is retrieved, the player fights and defeats Delrith with it. During the battle, Gideon creates a holy barrier to help protect both himself and the adventurer from Delrith's attacks. After the quest, he admits that he is surprised the barrier even worked.

He will also replace the Avernic wand and book for free after the quest.

Retrieved from "https://runescape.fandom.com/wiki/Gideon_Bede?oldid=24564862"
Community content is available under CC-BY-SA unless otherwise noted.