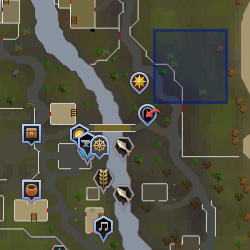 Gillie Groats is a farmer who helps milk dairy cows for her family's business.[1] She is the daughter of Seth Groats and has an unnamed husband.

She helps players with obtaining milk, telling them where to buy buckets, offering to give them a bucket, and helping them if they try milking a cow without a bucket. During Cook's Assistant, she lets players use her prized dairy cow to obtain the top-quality milk needed to bake a cake, considering it an honour to help.[2] If the player tries to milk a cow without a bucket, she laughs and says it's clear they've never milked a cow before and are likely from a city.[3]

She used to give out jobs to players until they were removed on 15 December 2009.

Retrieved from "https://runescape.fandom.com/wiki/Gillie_Groats?oldid=24562110"
Community content is available under CC-BY-SA unless otherwise noted.