Eleven level 112 glacors lurk within the cave's largest cavern, near the fairy ring, although they are unaggressive. A smaller cavern to the east of the main entrance houses the bane ore mine, which along with the Abomination Cave are the only locations in the game where bane ore may be mined. Movario wanders around the entrance cavern, studying the energy left over by the Stone of Jas.

After the quest, the residual energy left from the Stone of Jas will empower players who enter the cavern, enhancing their combat abilities in the cave as well as nearby locations such as Trollheim, the God Wars Dungeon, Fremennik Slayer Dungeon and the Wilderness for four hours of in game time. The empowerment remains with the player even upon death.

See the gallery below for a full area of effect.

A player being empowered with the energy of the Stone

The entrance to the Glacor Cave and the bane ore mine 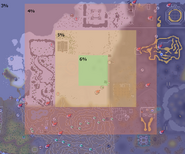 Retrieved from "https://runescape.fandom.com/wiki/Glacor_Cave?oldid=20198948"
Community content is available under CC-BY-SA unless otherwise noted.