Glophren is one of the 16 champions fought as part of the Champions' Challenge distraction and diversion. He is the gnome champion, and is one of the six Champions of Champions. Unlike most of the other champions, he does not have a champion scroll, but instead challenges players after they defeat 13 standard champions and Leon d'Cour. After he is defeated the first time, he may be fought again weekly for additional slayer and constitution experience.

Like the other champions, there is a special restriction during the fight with him; in his case, players are restricted to using magic, and shields cannot be used, meaning players will need to bring a wand to the fight. As the (currently) final champion, Glophren is one of the strongest in the minigame, perhaps second only to the Lesser Demon Champion. He is the only champion besides Joycey to have a unique arena; when he is fought, a cage surrounds the arena.

As with any boss, bringing food and the best magic equipment available is advised when fighting Glophren.

Glophren attacks using powerful magic attacks, and will occasionally vanish from the arena, reappearing along the outer rim along with four other illusions of himself, similarily to Nomad. All of these clones will attack the player from a distance simultaneously, and are just as powerful as the real one. These illusions will vanish when the real one is damaged.

He will also occasionally knock off players magic protection prayers, so keeping an eye out is advised. 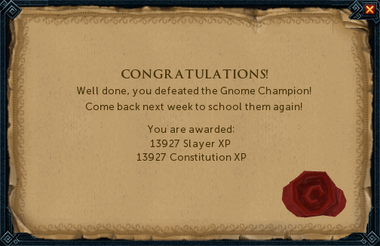 Glophren sitting on his chair. 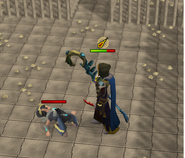 Glophren is defeated.
Click an image to enlarge
Retrieved from "https://runescape.fandom.com/wiki/Glophren?oldid=22596358"
Community content is available under CC-BY-SA unless otherwise noted.