Mourning's End Part I, Within the Light 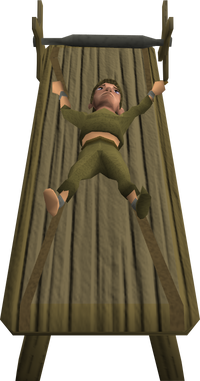 The Gnome (real name unknown) is an NPC who is being imprisoned by the Mourners in Mourner Headquarters in West Ardougne. He is involved in two quests:

The Gnome is first discovered in the basement and it is revealed that he can fix a device needed to re-dye some Sick-looking sheep. The player will threaten to take out his wisdom teeth, and he replies that gnomes do not have any wisdom. By using a feather on him to tickle his feet and bribing him with Toad crunchies, he will ask the player for a piece of soft leather and a magic log to repair it.

The Gnome is offered the chance at freedom when he agrees to help the player create a distraction. The distraction is to allow the player to sneak to the entrance to the Temple of Light to sing into the Enchanted crystal, so Arianwyn can teleport in without being captured by the Mourners.

The player then has a choice whether or not to hold up their end of the bargain near the end of the quest. The gnome's fate is unknown until Plague's End, where the player can ask the Head Mourner about the gnome.

Even if spared, the gnome is nowhere to be seen after the quest.

Retrieved from "https://runescape.fandom.com/wiki/Gnome_(Mourner_Headquarters)?oldid=24563918"
Community content is available under CC-BY-SA unless otherwise noted.