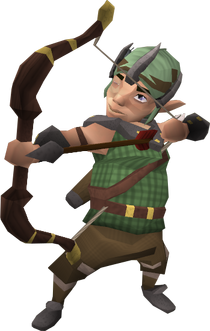 Gnomes are a race of small humanoids found in various parts of Gielinor. They can be found primarily in the Gnome Empire, although they are most common in the Tree Gnome Village, Tree Gnome Stronghold, and Battlefield of Khazard. Gnomes fight with either ranged or melee attacks, depending on the weapon they wield. They have different coloured hoods.

Gnomes can be pickpocketed at level 75 Thieving; doing so yields 198.3 Thieving experience, and one of the items listed below. It is recommended not to pickpocket them until you have level 85 Thieving, because even with Ardougne cloak 3 and Gloves of Silence, you will fail most of the time.

A good method of pickpocketing is to pickpocket gnome women on the first floor of the Grand Tree by the banks on the west side. Corner a gnome woman just outside the bank, as this gives the benefit of the bank healing effect.

A successful pickpocketing attempt will gain one of the following loot:

Retrieved from "https://runescape.fandom.com/wiki/Gnome_(monster)?oldid=22596364"
Community content is available under CC-BY-SA unless otherwise noted.