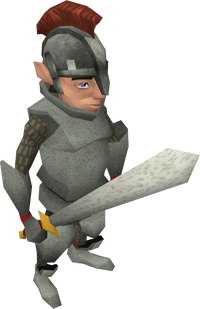 Gnome guards are gnome warriors found near and in the Grand Tree. They may be found with either a sword or halberd equipped. Strangely, the gnome guards do not appear in the same room as King Narnode Shareen, unlike other guards who would normally be closer to their king. They have relatively high life points for their level, and are weak to fire spells. In general, their attacks aren't very accurate, seemingly their max hit is better than their accuracy.