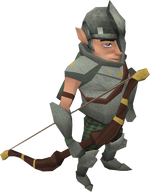 Gnome troops are soldiers of the gnome army found on the Khazard Battlefield and within the Tree Gnome Stronghold. At Khazard Battlefield, they can be found swamping the Khazard troopers most of the time. When they are attacking or being attacked by Khazard troopers, they will say phrases such as "You will never get us without a fight!" and "Tally ho!"

While in the Tree Gnome Stronghold, they have a Talk-to option, and will talk to players about the Khazard Battlefield and to join them in their cause.

Retrieved from "https://runescape.fandom.com/wiki/Gnome_troop?oldid=22596393"
Community content is available under CC-BY-SA unless otherwise noted.