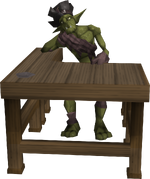 Two Goblins could be found seated at desks in Mr. Mordaut's classroom during the Surprise Exam random event. They were Mordaut's students, and could not be interacted with. According to their examine texts, one was studious while the other was bored.

Retrieved from "https://runescape.fandom.com/wiki/Goblin_(Surprise_Exam)?oldid=24565185"
Community content is available under CC-BY-SA unless otherwise noted.