Goblin Diplomacy is the first goblin quest and it involves the player helping Generals Bentnoze and Wartface decide on a colour for their goblins' armour. The quest's plot is often referenced in other situations where two parties are fighting over a mere colour.

There's a disturbance in the Goblin Village. Help the goblins solve their dispute so the world doesn't have to worry about rioting goblins. Aim: to help the goblins decide which colour they will wear.

Getting started and Gathering the needed items

Talk to General Bentnoze or General Wartface in Goblin Village, in the Kingdom of Asgarnia, (located north of Falador, and east of Taverley). They will say that the goblin race wants a new armour colour for the new goblin century, but is on the brink of civil war over whether it should be red or green. You suggest picking a different colour, and they agree to take a look at a sample of armour in orange.

Ask the generals where you can get orange armour. Eventually, one will answer that you can dye Goblin mail orange. Grubfoot will mention "a goblin" stole yellow dye from a witch in Draynor village, and mentions you may be able to find it there. One of the generals will mention you can find goblin mail in some crates located around the village.

Grab three suits of goblin mail from the following crates:

Likewise, if you don't already have the blue dye, take 2 woad leaves and 5 coins to Aggie to create the blue dye.

Dye one goblin mail orange and one blue.

Go back to Goblin Village and give the orange goblin mail to the generals. They will have Grubfoot try it on, and say they do not like it. They will ask for blue armour. Give them the Blue goblin mail. Again they will have Grubfoot try it on, and again it is rejected. They now want brown. Brown goblin mail can be found in crates in Goblin Village. Give them the plain brown Goblin mail. Grubfoot tries it on for the last time. They decide that the original colour, brown, is best after all. 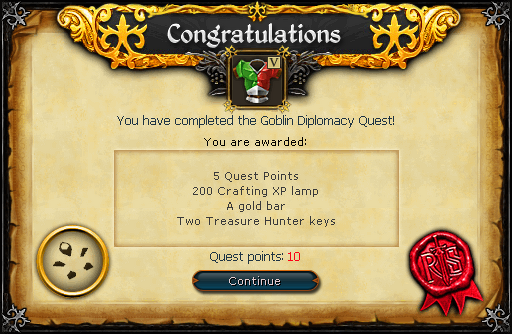 Completion of Goblin Diplomacy is required for the following: