Start a Wiki
This article is about the goblin found east of Lumbridge. For Mudknuckles the cook, see Goblin Cook. 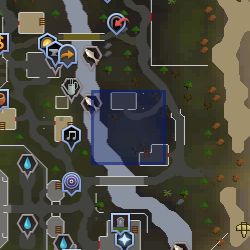 The Goblin cook is a non-player character found in eastern Lumbridge, near the southern-most bridge to cross the River Lum. The goblin cook can be seen cooking a chicken that was most likely stolen from a nearby farm. Players cannot interact with the cook through combat or dialogue, and can only examine him.

Originally, the house north of the goblin cook housed an eternal fire that players could use to cook on. On 1 July of 2008, the fire was made unusable when a spit was placed over it. The house was often referred to by players as the "Goblin House" because it was populated by many level-2 goblins. The goblin cook was released on 12 October 2010, when several changes (such as the addition of slings and Lumbridge guards) were made to Lumbridge. Amongst these changes was the movement of the fire and goblins to the area south of the house, as well as the addition of the cook.

Retrieved from "https://runescape.fandom.com/wiki/Goblin_cook_(Lumbridge)?oldid=24564135"
Community content is available under CC-BY-SA unless otherwise noted.