A contract for a goblin squad.

The Goblin squad (light) is an item used in Mobilising Armies. When used during a game, it will become a squad of goblins. They use ranged, which means they are weak against Dwarf squads and dominant over Elf squads. They have a combat level of 328, 4,800 life points, and level 110 discipline, but they move at twice the speed of heavy goblin squads. They wear grey Goblin mail and wield iron crossbows, and they find coins and various other items while exploring. If they die during a game, the item will become a Goblin squad (light) (defeated). 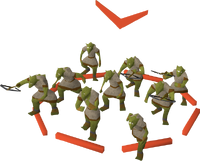