Start a Wiki
For other uses, see Godsword (disambiguation).

Godswords are powerful two-handed swords that were released on 28 August 2007, along with the God Wars Dungeon. They require 75 Attack to wield and are among the strongest non-degradable melee weapons to be found outside Daemonheim.

A godsword consists of a godsword blade, to which a godsword hilt is attached. One hilt exists for each of the gods whose armies still fight in the God Wars Dungeon, except for Zaros: Armadyl, Bandos, Saradomin, and Zamorak. Consequently, there are four different godswords: the Armadyl godsword, the Bandos godsword, the Saradomin godsword, and the Zamorak godsword. Each godsword has a different appearance, and a unique special attack or passive effect, but they all have the same combat bonuses.

Each godsword is made the same way, The original four godswords are created by obtaining godsword shards, which are dropped by both the generals and their bodyguards in the God Wars Dungeon. There are three different shards, all of which must be used on an anvil and requires 80 Smithing. A hilt must then be attached to the godsword blade, which is only dropped by the generals themselves (excluding Nex).

A related item known as the Zaros godsword may be created with 92 Crafting, along with an orb of pure, volcanic and corrupted anima along with the Dormant Zaros godsword, all obtained from killing Telos at the Heart of Gielinor. Except for its name, it bears no relation to the other godswords.

Somewhere near the end of the Third Age, Zamorak had been pushed back and contained in the Forinthry region. His defeat seemed inevitable. A loose alliance between Saradomin, Armadyl and Bandos began construction on the godsword, a weapon meant to ensure Zamorak's final defeat.

A squadron of Armadyl's best aviantese was given the task of delivering the godsword to the army of Saradomin, who was engaged in battle with Zamorak's forces. However, the existence of the blade had been leaked to Zamorak, and, aware of its destination, he sent a battalion of his best forces led by one of his most powerful generals, the mighty K'ril Tsutsaroth, to capture the blade. They laid an ambush for the aviantese transporting the godsword. Zamorak created his own hilt in hopes of using the weapon to break the siege of his forces by the other gods.

Upon coming under attack, the aviantese carrying the godsword retreated into a temple beneath the mountains, and set up a defence against Zamorak's forces in an attempt to protect the godsword. Bandos and Saradomin sent portions of their best forces into the temple as reinforcements for the aviantese, and for a time the three groups fought as allies against Zamorak's minions. However, as the battle wore on, old distrust between the forces of Armadyl, Bandos, and Saradomin resurfaced, and the forces of the three gods turned on one another, dissolving the alliance. The battle in the temple became a four-way free-for-all for control of the godsword; it is believed that during this great melee, the godsword was shattered into four pieces.

However the battle was dwarfed by the conflict going on in Forinthry, where Zamorak's forces were staging a last stand. By a massive stroke of luck Zamorak found the Stone of Jas, and knowing that he had to do something drastic to escape doom, used the Stone's immense power to lay waste to the entire region, creating the Wilderness. The sheer destruction of the action had several effects. So many aviantese were caught in the blast that they were driven to near extinction, to Armadyl's anguish. It also sealed the God Wars Dungeon, freezing its combatants in ice, where they would remain undisturbed for thousands of years, their battle - and the godsword - long forgotten. Lastly the explosion cut into the Anima Mundi itself, and its cry of pain caused Guthix to awaken; furious, he ended the God Wars, expelled the young gods from Gielinor, and enacted the Edicts of Guthix to prevent any more catastrophic conflict.

During the Fifth Age, a combination of tectonic movements within the Wilderness and long rows of fires lit by adventurers thawed the dungeon and the armies within it. Unaware that the God Wars have ended, the followers of Armadyl, Bandos, Saradomin, and Zamorak continue to wage war for control of the godsword. Adventurers are now able to enter the dungeon for themselves and do battle with the armies within. Those who are powerful enough to defeat the mighty leaders can obtain the pieces of the godsword, and reconstruct it for themselves.

Each godsword has a special attack or passive ability that can be swapped by using the specific godsword on the respective altar in the God Wars dungeon.

A godsword's special attack can be toggled to a passive effect by using it on the aligned altar in the God Wars Dungeon. All passive effects have a 25% chance to activate with each hit. The godswords are untradeable when passive. The Zaros godsword does not have a passive effect.

The Armadyl godsword can raise the wielder's Attack and Strength levels by 1, up to 10% of the wielder's levels. However, this does not stack with potions which typically offer stronger boosts, and as such it has limited benefit.

The Bandos godsword can drain the opponent's Defence by 1 level, until its Defence falls to 90% of the base. It is most potent against extremely strong/long boss encounters.

The Saradomin godsword can heal the wielder by 3% of their maximum life points and recover 3% of their maximum prayer points. It can eliminate the need for food on most Slayer tasks, and acts as a supplement to healing against bosses. It is also useful to those attempting the TzHaar Fight Cave.

The Zamorak godsword can freeze a target for 6 seconds. It is useful against mages and rangers that fight from a distance, and has other benefits in PvP scenarios, such as binding players carrying the flag in Castle Wars.

A player wielding an Armadyl godsword.

A player wielding a Bandos godsword.

A player wielding a Saradomin godsword.

A player wielding a Zamorak godsword.

A player wielding a Zaros godsword. 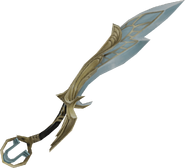 An up close view of the Armadyl godsword.

An up close view of the Bandos godsword. 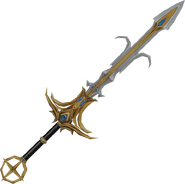 An up close view of the Saradomin godsword. 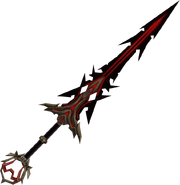 An up close view of the Zamorak godsword. 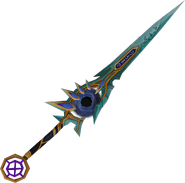 An up close view of the Zaros godsword.
Click an image to enlarge

Retrieved from "https://runescape.fandom.com/wiki/Godsword?oldid=24308961"
Community content is available under CC-BY-SA unless otherwise noted.