He looks down on his luck... 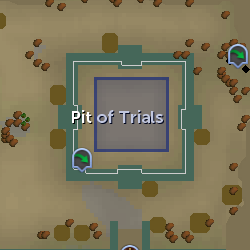 A Goebie can be found sitting down tied up in the middle of Beastmaster Durzag's arena at the start of the Liberation of Mazcab raid encounter. They were apparently left to die out in the arena by the Airut after they figured out how to escape, leaving their friends to die in the prison.

At the start of the encounter, players untie them, allowing them to venture back into the prison to rescue them. This causes Goebie prisoners to appear, soon followed by a number of Airut and chargers.

Retrieved from "https://runescape.fandom.com/wiki/Goebie_(Beastmaster_Durzag)?oldid=24565380"
Community content is available under CC-BY-SA unless otherwise noted.