View source
watch 01:54
Arcane: League of Legends - The Loop
Do you like this video?
Play Sound
[view] • [talk]

The Golden Path Challenge was an alternate reality game and competition that served as part of the build up to the release of Menaphos. It was released on 25 April 2017 alongside the Menaphos trailer and website. The competition could be entered until 12 June 2017.

The basic Magic carpet pet can still be obtained by completing the challenge as outlined below, but players will not be entered into a prize draw as the competition has finished.

The first letters of all of the words in this hint results in the word 'cinematic', referring to the Menaphos cinematic trailer released a month before. 14 seconds into the video, corrupted forms of Het, Scabaras, Apmeken and Crondis are shown, along with text in the Menaphite language. The translated text reads "bit.ly/gotogoldenpath", which is a shortened link leading to a hidden page on the RuneScape website.

The website contains more text written in the Menaphite language, with versions in English, German, French and Brazilian Portuguese. When translated to English, the text reads:

Viewing the source code for the page reveals text which is a clue for the sundial that was located north of Menaphos. Since the release of Menaphos on 5 June 2017, the sundial is located in the Grand Library in the Imperial district of Menaphos.

Interacting with the sundial allows players to rotate the gnomon to point to letters in Menaphite script. Throughout the challenge, the sundial is used to enter specific words that will allow entry into the associated competition.

The link to an Instagram page was also found in the source code of the same page. The account's posts were made over the week of 24 April 2017. Each post contains a screenshot of a character or location, and a small text riddle.

Wahisietel
"He is my first."

Apmeken
"She is my second."

Dommik
"My third takes you here."

Uzer
"My fourth lays in ruins."

Damis
"My final is the real Desert Treasure."

The first letters of each of these characters and locations spells W-A-D-U-D, revealing the name to be Admiral Wadud. To complete this part of the challenge, enter

On 9 May 2017, the same date indicated by the game message from the last step, the first Road to Menaphos livestream took place. Throughout the livestream, various plush toys are visible on the table in front of the Jagex Moderators, including a cat. In the second half of the stream, the cat gains a sticker of a YouTube logo on its chest.

Three days later, the third episode in the official Road to Menaphos series on RuneScape's YouTube channel was uploaded. At around 2:25 in that video, a cat meowing can be heard. The image on the video during that time was of a corrupted thrall, which can also be seen as a promotional image on the microsite for Menaphos. At the bottom of the image were red and yellow distorted characters and symbols.

If the image was opened with a text editor, it displays ASCII art resembling the Reddit logo and several words of text, including 'HERO_BATAL'. A Reddit user with the same name was found who has a number of comments on various threads. These comments include three instances of the message "I am the code". To complete this part of the challenge, enter

After taking the first letter of each word before the punctuation marks in the last message (friend, outcast, risk-taker, underdog, memorandum, shadow), it spells out F-O-R-U-M-S, which indicated that the next clue would be posted on the RuneScape Forums.

On 15 May 2017, a thread for that week's update was posted on the forums. In the same thread, a post by a Jagex Moderator called Vizier E was posted. The message posted was in Arabic, اتبع لي إذا كنت تستطيع, which translates to "Follow me if you can."[2] The account also posted in the forums for other languages.[3][4][5] The next day, the same forum user posted again in another thread with the following message[6]:

This text is a Vigenère cipher using the keyword "TUMEKEN". When decrypted, it says:

During the Road to Menaphos stream on the same day, various concept art was shown. In one image, there are faint Menaphite script characters at the top and bottom which translate to "Keep looking". In the same image, the characters

("UM") can be seen on all four corners. This can be read as "Keep looking [in the] forums".

It was discovered that the first post in the forum thread that the Vizier E account posted in, by Mod Kalaya, had been edited by the vizier.[7] When comparing the forum post to the near identical news post, it is seen that the bottom of the post is different.

During the week, a chatbot was found that uses the name of 'Grand Vizier E'. The bot contains responses that are triggered by certain words and phrases. Upon sending messages with certain keywords, clues are given:

The clues result in the letters H, S, A, and N (appearing twice in the word 'nothing' and once in the word 'everything). To complete this part of the challenge, enter

On 21 May 2017, a promotional video for Menaphos was released by Jagex. During the video, a lot of concept art can be seen for around half a second each. There are Menaphite characters on the art that read "The Golden City of Menaphos", apart from one that read "The Golden Path of Menaphos", which displays the four faction leaders. In the art, the second person's sword has characters on it that read "CMNDR_A", and directly underneath it on her leg is the Twitter logo.

On 25 May 2017, a second Twitter account named 'CMNDR_A' posted the first concept art that 'Commander__A' posted. However, this version had Menaphite characters hidden on the left side of the artwork that read "I am the real deal".[11]

On 26 May 2017, the second account posted two additional altered artworks with the first having the Eye of Horus over a walkway, the symbol for Menaphos inside a canal and a black creature inside the pyramid in the upper levels concept art. The following clue was the original Menaphos concept art with a hidden message in the road that read "Foll me" and the Menaphite character "J" with Spades added next to the adventurer pointing towards Jack of Spades.[12][13]

Later on 26 May, the Jack of Spades microsite for Menaphos was released and the header video file was visibly corrupted. If the WEBM was opened with a hex editor (or notepad), it displays ASCII art resembling snake charming with the message: "Your hunger for the Golden Path, its hunger fails to abate. May 30th is your next port of call, don't be late."

Commander__A
"Inside the bowels of Menaphos,
your answer awaits.
Adventurer! Finish what you started.
Accomplish! Kneel! Elate!
⛵️⛰💧"

Commander__A
"The #GoldenPath is illuminated, lit up in front of your eyes.
Keep searching, adventurer - #Menaphos is full of surprise."

CMNDR_A
"My compatriot teases you, With her efforts to block - But which one of us is real? The Golden City amok!"

CMNDR_A
"The Golden pyramid, a monolith of awe, Nobody but me knows what's in store. Continue the path, be on your way. Time to hassle, not to delay!"

On 30 May 2017, the last Road to Menaphos livestream was broadcast which showed the reputation system that will be added for Menaphos.[14] During the stream, a task list was displayed during the stream that had Menaphite script reading "Git gud". While demonstrating the reputation system in a release candidate version of the game, the name "Akhomet" was briefly shown on the imperial faction section of the reputation interface. Additionally, Mod Chaplain used the in-game name "ArednammoC", which is "CommanderA" spelt backwards, during his walkthrough of Menaphos in which a Quick Chat message "ArednammoC of the Imperial district: fancy a site seeing tour of Menaphos?" was visible. Adding the name to the end of the official Menaphos microsite's URL takes you to a page that displays an animated GIF, containing hidden frames of Menaphite script.

The animated GIF on the microsite

A frame from the GIF
"Tome"

A frame from the GIF
"Of"

A frame from the GIF
"Menaphos"

The YouTube description of the Tome of Menaphos video that was published earlier contains the text "Find out more about the Golden City of Menaphos right here" along with a link to a Twitch channel by "cmndr_a".

On 31 May 2017 at 16:00 UTC, the aforementioned Twitch channel started broadcasting for approximately 10 minutes. There was no audio, but visuals using the in-game freecam option were shown around Al Kharid palace and the Duel Arena. The player using the freecam was wearing the Book of Faces override. After the stream had ended, the banner for the Twitch channel was updated twice.

After the stream ended, around 16:10 UTC

At around 16:45 UTC. Menaphite script reads "pogchamp", which is the name of a global emote on Twitch expressing hype or excitement.

The Book of Faces override refers to RuneScape's Facebook page, in which they uploaded some images on 2 June of various Menaphos characters.[15] The image of Het (which the statue shown in the earlier stream and banner is of) has differing Menaphos script to other images. It reads "The chosen four".

Appending the phrase to the end of the Menaphos microsite URL results in a page displaying all four faction leaders - Wadud, Batal, Ehsan and Akhomet. The image of Akhomet on the page contains faint hidden Menaphite script letters that can be seen when viewing the image without a background. It reads:

From this clue, and a screenshot that had also been released on the Menaphos website depicting another sundial, it was indicated that the last word will be entered there when Menaphos releases in-game on 5 June 2017. When Menaphos was released, the sundial that was located outside of the city was moved to the Grand Library inside the city.

To complete this part of the challenge, enter

After the final part of the challenge was solved, when Menaphos was released, many players complained about the lack of information given regarding the prizes that are awarded. In particular, players criticised the lack of information regarding the golden variant of the magic carpet pet, noting that there was no indication of having to enter the first two codes before 21 May 2017.

Many players believed that the newspost for the challenge, which stated "Everyone who completes the challenge in its entirety will get a special, Menaphos-themed prize (and those who are speedy will get something even more awesome!)"[1], indicated that players that finished the challenge soon after the final part was able to be solved would receive the extra reward.

One of the Jagex employees behind the competition, Mod JD, stated that he expected codes to be inputted into the sundial as soon as they were available, as that would be required to see the riddle for the next part.[16]

Players also criticised how easy the challenge was to complete upon Menaphos' release, as it only required simple entry of codes into the sundial to receive the prizes (apart from the golden pet variant). The ease at which the challenge was completed meant that the server-wide announcement received when a player completed the challenge, Player has solved the mystery of the Golden Path!, was heavily spammed. As a result, the broadcasts were changed to be friends only announcements in a hotfix on the same day.[20][21]

The English version of The Legend of the Golden Path 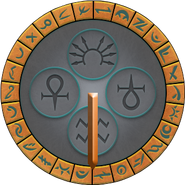 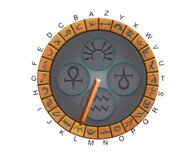 The original plan for the ARG[22]