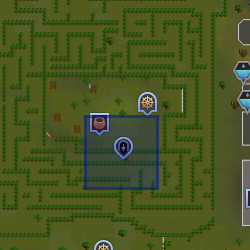 Golrie is a gnome found in the jail of the Gnome Village Dungeon, he is the grandson of Bolrie.

He locked himself in a room to avoid some hobgoblins, but managed to leave the key to unlock the door elsewhere, outside the room. He was not planning on leaving until the hobgoblins departed, but does ask the player to help him solve his dilemma in the Waterfall Quest. Being a practical-minded gnome, he realises the utility of asking folks outside of his jail cell if they might be so kind as to look for the key. The key can be located by searching some crates on the east side of the dungeon; the crate is on the east side of the room as you first enter, and it is slightly a different colour than the others. The hobgoblins seem quite content with their surroundings though, so Golrie waits. He is quite content to do so it seems, and rewards the player with Glarial's pebble when given the misplaced key to the door, and will replace it if lost.

After starting Roving Elves, the hobgoblins get locked in his cell, and he escapes.

The following takes place during The Path of Glouphrie.

The player wants to know more about anti-illusion devices and when asked, he tells the player that his grandfather used to travel the world and collect elven items to send it to him as souvenirs. He would keep the parcels and crates he received, in the storeroom located in the other part of the dungeon. He will tell the player to search his storeroom for a key. Once the player finds the key, they go back to where Golrie is and use it on the northern gate where they search the chest to obtain some crystalline disks. The player returned to Golrie and talks about the anti-illusion device. He will mention a tunnel in the eastern part of the cave.

The following takes place during The Prisoner of Glouphrie.

He informs the player that what he had been using as a bookmark for several years was a note from his long lost grandfather, Bolrie. He asks the player for their help and suggests that they take his mother, Golrana, with them. Golrie tells the player that she can be found on the surface inside the Tree Gnome Village and teleports the player directly to her.

Once at the surface, Golrie will introduce the player to his mother, Golrana. He tells her that the player was using the letter as a bookmark for a few years before they realised that it was really a letter from Bolrie. Golrana becomes excited and snatches the letter from Golrie to read it for herself. Eager for the chance to rescue her father, Golrana is resolved to go save him by herself, but after a little bit of prompting, she will allow the player to accompany her as her "questing apprentice". Golrana tells the player to meet her north of the observatory and south of the lava fields when they are ready.

Once the player and Golrana return at the Tree Gnome Village, Bolrie and his brother, King Bolren, are reunited, and Golrie is finally able to meet his grandfather for the first time.

Retrieved from "https://runescape.fandom.com/wiki/Golrie?oldid=24925861"
Community content is available under CC-BY-SA unless otherwise noted.