Gorvek is a dragon that featured in Vindicta's memory in Tales of the God Wars. He was responsible for raising Vindicta and is her current mount. Morvannon used to be his dragon rider before she was killed, but Gorvek managed to harvest an egg from her body. Gorvek is not a wyvern, even though he only has two hind legs, but he is not quite a dragon either; Gorvek is "an outlier" of a different species, similar to the King Black Dragon.[1]

Gorvek supports Vindicta in the first half of her fight by spraying dragonfire in a straight line that deals up to 950 magic damage per tick while players are caught in it. Once Vindicta reaches half health, she will mount Gorvek. Gorvek does not have any actual stats in normal mode, as he only serves as a support unit in the first phase and is mounted by Vindicta during the second when she reaches half health.

In challenge mode, players must fight Gorvek after defeating mounted Vindicta. He carries an additional 300,000 life points and attacks at an extremely fast rate (1.2 ticks per attack). This attack can hit very high even through prayer so defensive abilities are highly recommended to mitigate his damage output. After every 10th melee attack, he will fly back into the middle of the room and launch dragonfire before resuming the fight as normal. 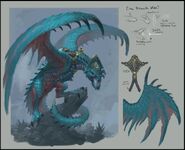 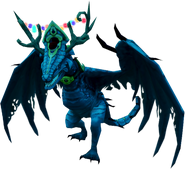 Gorvek with a santa hat and antlers during Christmas.
Click an image to enlarge

Retrieved from "https://runescape.fandom.com/wiki/Gorvek?oldid=24924458"
Community content is available under CC-BY-SA unless otherwise noted.