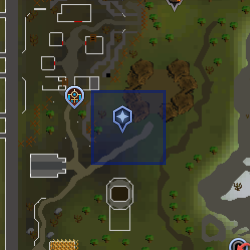 Goutbones is a goblin who has taken residence next to Bandos' crushed head at the remains of Bandos' tower. He appeared after The Bird And the Beast ended to offer information about the event, telling them in his own words, the aftermath, and what players can do to find the rewards post-event.

Goutbones will also replay the opening and ending cutscenes, along with replacing destroyed faction tokens for both sides if players happened to have lost them.

Despite his god dying, Goutbones does not appear to be overwhelmed or saddened, and says that other Bandosians did a good job of fighting Armadylean warriors, despite being outnumbered. Goutbones also believes that a new god will take Bandos' place as the god of war, and they will have more followers. Armadyl, being Bandos' killer, might have a taste for god-killing according to Goutbones, and believes that Armadyl will follow up by fighting Saradomin, claiming neither of them are to be trusted.

Retrieved from "https://runescape.fandom.com/wiki/Goutbones?oldid=24924162"
Community content is available under CC-BY-SA unless otherwise noted.