Gower Quest is a quest that was first announced at RuneFest 2015. It was marketed as a part of RuneScape's 15 Year Anniversary Celebrations. The quest was released on 20 June 2016 and is a standalone free-to-play quest with no skill requirements, but with a 34 quest point requirement. The Gower Quest had input from Andrew and Paul Gower as guest designers and executive producers, as well as featuring them as in-game characters.[1] The quest's plot sees the brothers living as cabbagemancers on the Gower farm, south of Varrock, failing to grow cabbages in their cabbage patches. The player has to create a cabbagespeak amulet to find out what the cabbages want.

Gower Quest is steeped in the spirit of RuneScape and our 15-year anniversary, so you probably won't be surprised to hear that, this time, something strange is happening to Gielinor's cabbages. Andrew, Paul and Ian could really do with a brave adventurer to come and find out what exactly is going on.

Start by talking to Andrew, Ian and Paul just south-east of the Varrock lodestone. They are excited to have a real-life adventurer and ask for your help to figure out why cabbages aren't growing.

After talking to them, proceed to the room directly to the west. Search the crate in the north-east corner to get a piece of pure essence, which has a flip option on it. Clicking flip turns it into a life rune. Proceed to the cabbage patch to the south-west of the house and search the scarecrow to get a cruciferous mounting. Then go a few steps to the east into the courtyard and search the water barrel in the north-west corner to get a brussels sprout.

Combine the brussels sprout and cruciferous mounting to make an unstrung brassican amulet. Then head to the rats east of the house and search the food trough to get a broccoli root. Spin this at the spinning wheel in the house to make a broccoli string and use it on the unstrung amulet to create a brassican amulet. Finally, use the life rune on it to turn it into a cabbagespeak amulet.

With the amulet equipped, go back to the cabbage patch and speak to Crispy the Cabbage. He explains that they are rioting, and that they want partyhats. Return to the Gower brothers, who will wonder why cabbages want partyhats, but give you a stack of 4 pink partyhats. Return to the cabbages and give them the partyhats. Afterwards, Crispy the Cabbage will explain the cabbages are magical beings, and if there is a problem then there is a problem "behind sceneries" and will get into your backpack. Return to the Gower Brothers to get a disk of returning, which needs to be used in the Dwarven Mine, north of Falador.

Once in the Dwarven Mine, use the disk of returning to scan and follow the direction. You will eventually be led to the cave where Boot the Dwarf resides. Once you find the correct location you will be transported to The Black Hole. The area is completely black, and you need to search around for things in the dark.

A very small glimmer of light will occasionally sparkle on the screen, giving the player a hint as to the location of what needs to be interacted with next after each of these following steps.

Start by searching the table in the centre to get a rock. Use the rock on the wall to the west to hear a grinding sound. Search under the table to get an orange, and eat it to get a small key. Use it on the bumpy wall to the east to get a tinderbox and then use the tinderbox on the "scary wispy thing" at the north-east corner to retrieve a skull. Use the skull on the unusual shape in the south-west corner to make the Gate of Lloigh-enn appear.

Go through the Gate of Lloigh-enn, and you will reach a white area inhabited by Thordur the dwarf. He will explain where you are, and tell you about "Behind the Scenes", before transporting you there.

Once in the pub, talk to Spiral Orb, the DJ. She will explain that the Life altar is broken, and that you need to retrieve three fragments of the altar in order to repair it. When asked, she states that you should talk to Lucien, Steve the Chaos Elemental, and Thok.

Go talk to Lucien in the north-west corner. He will tell you that the first fragment has been stolen from him by the Wise Old Man and that it is located within the vault of the bank, but you have to figure out the four problems preventing you from getting into it.

Go into the Central Bank Portal and speak to Claire Hick in the centre of the room where you will find the first problem to overcome. Next head to the back of the bank and speak to Ernie the guard to find the second problem. Check the vault door behind Ernie to reveal the last two problems, where it is revealed that you will need to recruit four people to help break into the vault.

You will need to get all four problems located before you can start asking questions in the main room of Romeo, Guthix etc. If you do not find all four problems, the dialogue will not be unlocked.

Talk to Romeo to the south-west of Spiral Orb, and ask him if he will help you break into the bank. He will tell you that you need to get him love advice from five people. Those five people will be the God Wars Dungeon bosses, Commander Zilyana, K'ril Tsutsaroth, General Graardor, Kree'arra and Nex. You can find them to the east of the Spiral Orb. Once they give you some pointers, return to Romeo where after giving him the advice, he will accept your help and that he will meet you in the bank.

Speak to Guthix to the south-east of Spiral Orb, and ask him for his help. He will ask you to talk to cabbages for an actor's position. Go north around the bar and talk to one of the cabbages at the table. They will talk about needing someone to play the role of Guthix in a play they are writing, and will hire Guthix once you tell them that he is looking for work. Go back to Guthix and tell him this and he will then teleport to the bank saying he will wait there.

Tim and Crunchy, the environmental leads

Talk to Tim and Crunchy just south of Spiral Orb, and ask them to join the heist. They will request some refreshments for their environment artists. With five empty spaces, ask a bartender for five cups of tea, and they will give them to you all at once. Hand one to each environment artist around the bar and return to Tim and Crunchy where they will agree to join you in the heist.

Talk to the penguin Sphenishchev, who is located just west of Spiral Orb, and south of Araxxor. He will talk about how nobody can ever remember interacting with him, but will agree to help you get into the safe with no further requests. Once you've recruited all four people return to the bank to begin the heist.

Enter the Bank and Speak to Claire Hick, where you will introduce her to Romeo so that he can distract her. Once she and Romeo teleport away make your way to the back of the bank and talk to Ernie, at which point Guthix will get him to leave the vault unguarded. Click on the vault door to allow Tim and Crunchy to remove it and then enter the vault. Pick the chest in the centre of the vault with the help of Sphenishchev, then search the chest to collect the first life altar fragment. Once you have the fragment leave the bank area and return to the pub.

Go up to the Grand Exchange panel in the northern section of the room where you must complete a pipe puzzle. Rotate the pipes so that they connect to the right side of the interface, making sure that they link up to the pipes of the same size. Once the puzzle is completed you will be given the second Life altar fragment. Head back to the main pub area and make your way to Thok.

Talk to Thok, north-east of Spiral Orb, near the Beta Room portal. He tells you that the Life altar fragment he found is in Beta Testing room, and tells you that Max is there too. Head through the Beta Room Portal and meet with Max where he'll agree to give you the fragment if you help you test some of the unreleased skills.

Head into the first room where you will encounter the Riding tutor, who will teach you how to train the Riding skill. Simply click on one of the rocking unicorn stands and fill up the bar to train the skill, while making sure to switch to the stance that the tutor shouts out. Once the bar has been filled leave the room and head south-west to the Sailing room.

Once inside this room embark on the jetty near the entrance and click on the Battleships to fire cannons at them. You can also click on the bubbling water to search desert islands for treasure. Once the bar has been filled leave the room and head to the final room at the north-west section where you must train the Bankstanding skill.

Head inside and then stand within the bank area to fill up the bar, making sure to click back inside if you are forced to move away from the bank area. Once the bar is filled speak to Max and he will give you the final fragment of the Life altar. Leave the Beta-Testing Room and return back to the pub.

Once all fragments of the Life altar are located, head into the Life altar portal located at the south-east corner of the Behind the Scenes area. Once inside repair the altar using the three fragments and once it has been repaired you will be ambushed by the graphically updated Black Knight Titan. He will reveal that he killed the previous cabbagemancer that resided here, which meant that there was nobody maintaining the altar, causing it to explode, in an attempt to lure you here to steal your disk of returning so that he can be released out on the surface.

Fight the Black Knight Titan where after beating him, he will respawn and attack the player again. After you beat him a second time Crispy the Cabbage will interrupt and ask you to throw him up to the roof so that he can get help in beating the titan. Beat the titan a third time to trigger a cutscene showing that the cabbage returned to the farm to ask for the Gower Brothers help, at which point they will arrive at the Life altar. Your health and prayer points will also be replenished.

Attack the Black Knight Titan again, where he will now attack using both of his weapons allowing him to deal damage faster. Once he has been defeated for the sixth time he will lay down defeated, saying that he will never be released out on the surface. Andrew reveals that there are plenty of disks and that he gives one to the titan, allowing him to be released.

This is a safe battle; if you die, you will respawn in Behind the Scenes without losing anything. However, you will need to start the fight over from the beginning.

Speak to the Gower Brothers where you will tell them about the altar and the previous cabbagemancer that resided here, where they decide that they will remain down at the altar to maintain it. 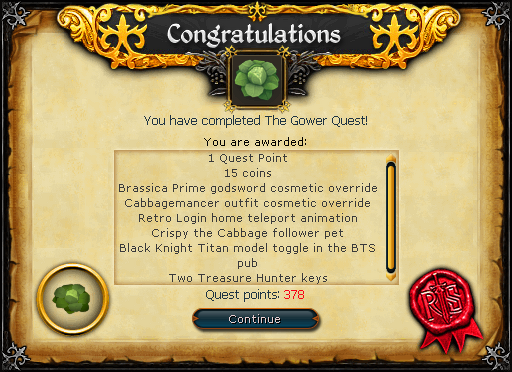