The Pharaoh's chief advisor and physician (and tax collector). 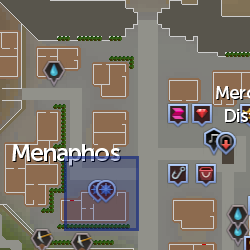 Ozan later reveals that she is corrupt, as her tax ledger is actually where she writes rumors and gossips, which she uses to blackmail merchants, and that she is the Grand Vizier of Menaphos by extorting others.

In 'Phite Club, it is shown that Ehsan has bargained with Osman. In return for supporting Osman's coup, her position in Menaphos would be unchanged, in addition to obtaining more influence in the city. Ehsan asks the player to assist Wadud with some striking port workers. After solving Wadud's problem, Ehsan reports that the strikes have ended and upholds her end of the deal.

Rumour has it that Ehsan initiated her meteoric rise to Grand Vizier as a young child immediately after she was sold into slavery by her parents; managing to sweeten the deal to such an extent that she ended up running the shop mere months later.

Murmurs in the market mandate that she is the one responsible for the introduction of currency to Menaphos, convincing the dullard denizens to part with their prized possessions at the first gleam of gold and the shine of a smile. The only thing that can really be ascertained with regards to Ehsan is that she is the beating heart of all trade within Menaphos, an economy that does not begin and end with simple rumours.

Her influence also bears no signs of a conclusion, swelling and straining at the seams of the desert like her obese purse. It's no surprise that foreign diplomats will rarely stray from her gaze during their stay in Menaphos, pampered with the most select endorsements from the merchant matriarch of Menaphos. 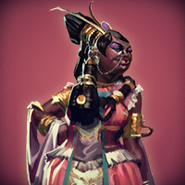 Concept art of Ehsan.
Click an image to enlarge

Retrieved from "https://runescape.fandom.com/wiki/Grand_Vizier_Ehsan_(Merchant)?oldid=24923299"
Community content is available under CC-BY-SA unless otherwise noted.