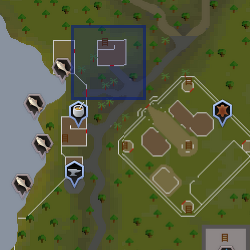 Grandpa Jack is a retired fisherman living in a house in Hemenster, just south-east of the McGrubor's Wood.

He plays a small, yet vital role in Fishing Contest, where he advises the player on how to beat the Sinister Stranger in order to win the Fishing trophy. He will also give the player information on the red vine worms during the quest.