Once known as Carrallangar, the Graveyard of Shadows is located in the Wilderness; levels 19 to 23. Not to be confused with the Forgotten Cemetery, the graveyard is home to a large collection of dead trees. The monsters that inhabit the area are various low level zombies. Players can teleport directly to the Graveyard of Shadows by casting the Carrallanger Teleport spell from the ancient spellbook, or with an enlightened amulet.

The Graveyard of Shadows also contains several item respawn points. There are 5 plank (useful for Construction) and 4 tile respawns within the graveyard, as well as a crossbow, a steel dagger, iron dagger and an iron helm spawn point. This graveyard is one of only three plank spawn points within the free-to-play world, and, therefore, can play an important role in the Dragon Slayer quest. It is also one of only two known spawn point of tiles, which currently have no in-game use.

To the north of the Graveyard of Shadows lie the ruins of one of the last remaining cities within the wilderness. Players should be wary, however, as they are overrun with deadly red spiders. The Wilderness Volcano lies to the west of the graveyard. 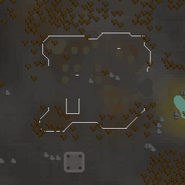 Retrieved from "https://runescape.fandom.com/wiki/Graveyard_of_Shadows?oldid=19245343"
Community content is available under CC-BY-SA unless otherwise noted.