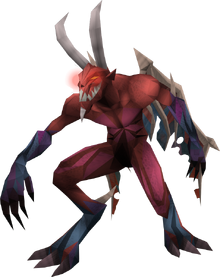 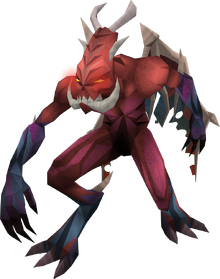 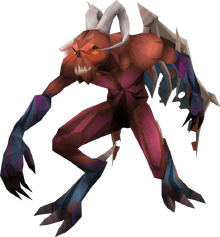 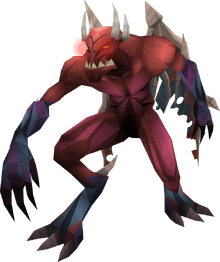 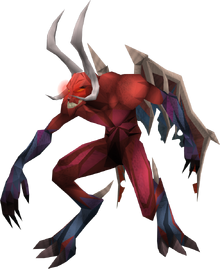 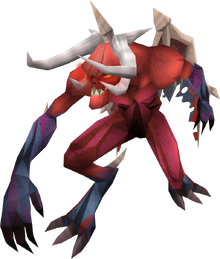 Greater demons are demonic beings found in many remote locations throughout RuneScape. As most other demons do, they follow the god Zamorak. Greater demons are more powerful than lesser demons, with highly accurate magic attacks. They are distinguished from them by their large wings and slightly greater stature. Like all demons, they are weak to Silverlight and holy water. A famous demon slayer known to have fought these creatures is Gaalsien.

Greater demons originate on Infernus, where they were called Alyaroth, as the other demons seen in RuneScape do. They are part of the Avernic race, tribal and primitive, and slaves to whomever was ruling Infernus. At the time of Palkeera's memory of the realm, they were enslaved by the cannibalistic Chthonians, who were unable to consume the Avernics for some reason. Among the Avernic demons, the Tsutsaroth were the dominant tribe, ruling over the Alyaroth and Byzroth in a brutal manner.

Greater demons are often killed as a good source of crimson charms and as frequent droppers of clue scrolls. They provide good experience as a slayer task due to their low defence. K'ril Tsutsaroth in the God Wars Dungeon counts as a greater demon for slayer tasks, allowing for a more challenging alternative.

Accursed or infernal urns can be useful when killing greater demons to collect the dropped ashes and grant 20% more prayer experience than just scattering them.

A demon specifically found while Dungeoneering.