A madman who has been driven to do terrible things.

Gregorovic, also known as The Faceless One, is the general of Sliske's army in the Heart of Gielinor. In order to face him, players must have a Prayer level of 80 or higher.

Obtaining all unique drops will unlock the title, [Name] the Faceless One.

As explained in a miniquest, Gregorovic was a fatally ill human of the Fourth Age, who was desperate to avoid death. In the hope of prolonging his life, he captured some Cwyir elves and employed torturous experiments in order to find out the secret of their long lifespan. His work was unsuccessful, and he believed that some sort of "elven magic" beyond his comprehension was responsible (Seren had blessed the elves with longer lifespans).

When this failed, he sought out the Mahjarrat Sliske at the Barrows, and offered him his soul in return for eternal life. Sliske accepted his offer, but questioned whether Gregorovic had thought his proposal through. Sliske then killed Gregorovic and resurrected him in a monstrous new form resembling a macabre jester. Gregorovic was initially horrified and told Sliske that he had made him a monster, but Sliske slyly told him that he had always been one. Sliske then instructed him on how to maintain this form, and upon learning that he could become even stronger, swore fealty to the Mahjarrat.

When The Heart was discovered, Gregorovic was one of the five generals to arrive. Helwyr and the Twin Furies both swore revenge on him for the deaths he had caused. He then summons Sliske's wights to claim the Heart in his name.

Gregorovic makes an appearance in Sliske's Endgame quest, where he is summoned by Sliske to kill the World Guardian alongside undead Nomad and Linza the Disgraced, using many of the same abilities as he does in the Heart.

When fought in Sliske's Endgame, Gregorovic uses a different set of attacks, and unlike the encounter in the Heart of Gielinor, his attacks do not poison. 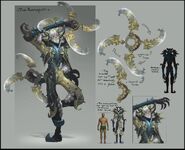 Gregorovic wearing a santa hat at Christmas.
Click an image to enlarge

Retrieved from "https://runescape.fandom.com/wiki/Gregorovic?oldid=24565513"
Community content is available under CC-BY-SA unless otherwise noted.