A goblin with a lisp. 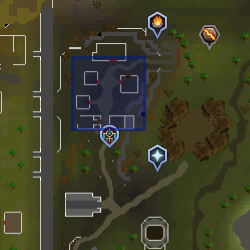 Greldo is a goblin with a speech impediment found in Goblin Village. When talked to, despite not wearing any himself, he will proclaim that green armour is best, implying he is one of the followers of General Wartface. Players are able to question him on why he likes green armour, upon which he will reveal that he likes green because it's the same colour as cabbages. He expresses extra fondness for the cabbages in Draynor Manor.

Players are also able to question him on his lisp, although he seems to be completely unaware that he has one.

In the former Black Knights' Fortress quest, he was the servant of a Witch known as Lensig who was employed by the Kinshra to brew an invincibility potion that they could use to capture Falador. During the quest, he was tasked by his mistress with obtaining a certain type of cabbage from Draynor Manor for the invincibility potion, being given strict instructions to not use an ordinary cabbage, as it would disrupt the spell. The player then foiled their plan by dropping a regular cabbage in the cauldron from a hole above it.

Retrieved from "https://runescape.fandom.com/wiki/Greldo?oldid=24563507"
Community content is available under CC-BY-SA unless otherwise noted.