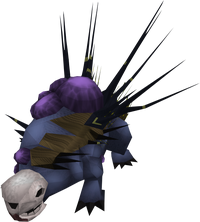 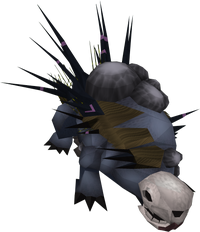 A Grifolapine is a monster found in the Polypore Dungeon (fairy ring code BIP) on the third level. It requires a Slayer level of 88 to kill, and 60 Magic for the player to receive as a Slayer assignment.

Grifolapines have similar drops to Grifolaroos but have much better drop rates for grifolic flakes, the sought-after item to create the grifolic armour set. In addition, they are the only monster that drops the grifolic wand and grifolic shield.

The mushrooms on the platform can be used to hide behind to prevent toxic fungus damage. This monster attacks with Magic most of the time, so Protect from Magic/Deflect Magic will prevent most damage dealt. When the player is using neem oil, it will not attack with Magic anymore, but will instead use its Ranged attack. In this case, Protect from Missiles/Deflect Missiles can be used to significantly reduce damage dealt. Grifolapines are resistant to Ranged and melee damage, so Magic is the ideal method of attacking these creatures.

These monsters never move when idle. They will only move when they say "Raargh!", moving twice as fast as a player when running. Unless you are quick and use Neem oil instantly, you will take fungal damage. Their fungal damage does low to medium damage (50-150) rapidly. However, safespotting prevents this. If they are blocked, they will say *Sigh*, and resume attacking. Upon ending with *Sigh*, it skips 1 or 2 of its battle turns. Their relatively low damage also makes it useful to cast Soul Split on them, as the player hits higher than they do.

Grifolapines shouldn't be far from their home platforms, unless someone has attacked them. Four grifolapines can be found in one of their grifolic-infested platforms. It may be hard to notice their Magic attack, because it looks as if a Grifolapine is idle. Their Magic attack hits harder and quite often, so it is best to constantly use Neem oil on them to prevent this.

Grifolapines are fairly easy to kill if you safe spot them, although it is advisable to take some food just in case you need to heal. An experienced and high-level player can easily finish a task in under 20 minutes; however, low level players will have more of a challenge, so extra food is advised.

A total of three seeds will be dropped, one or more of the seeds may be the same.

Retrieved from "https://runescape.fandom.com/wiki/Grifolapine?oldid=23120157"
Community content is available under CC-BY-SA unless otherwise noted.