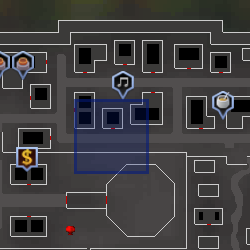 It can take some time to find all six bloodveld younglings, as each can appears in various places and soon disappears, with apparently several minutes before it appears again.

If the player skipped this task during the quest, the player can talk to Grigan Kaninus after the quest and receive the task at that time. Kaninus will tell the player that he fears the wrath of Vanstrom Klause for losing the younglings, even though by this time Vanstrom Klause has been killed by the player. It is not known if this is a glitch or if the vampyres of the upper tier are keeping Klause's death secret.

Retrieved from "https://runescape.fandom.com/wiki/Grigan_Kaninus?oldid=24564554"
Community content is available under CC-BY-SA unless otherwise noted.