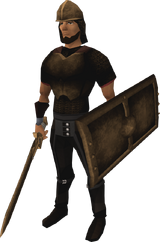 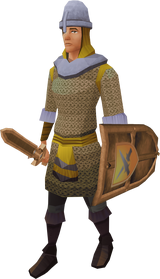 There are many guards in RuneScape, usually in populated, major cities, such as Falador, Varrock, and Ardougne. Guards patrol the area of just south of the Wilderness wall at Edgeville. There are also guards at the mansion in the quest Ratcatchers.

Level 9 guards can be found in Burthorpe and Catherby markets, guarding the stalls. They attack with melee and are weak to air spells.

The guards of Ardougne wield a steel mace, iron chainbody, and a helmet that looks like a spiny helm without spikes. They also wear red trousers, and blue shirts under chainmail. They are weak to fire spells.

Guards in Varrock wear a golden/yellow version of the Renegade Knights' uniform. They are level 25, they attack with melee and they are weak to air spells. Until late 2007, Varrock guards were identical to Falador guards.

Except for in Taverley and Catherby, guards can be pickpocketed at with level 40 Thieving, giving 46.5 experience and 30-34 Coins. You can get up to 60 coins per pickpocket after finishing the Lost Her Marbles caper. If unsuccessful, the player will be hit for twenty life points and stunned for five seconds. If someone kills the guard just as you are pickpocketing you will get the message "Too late; they are dead" and you will receive neither experience nor loot.

Most guards respawn approximately 50–55 seconds after their bodies disappear on the ground. This is a relatively long time for people who are power training their combat skills; it is advised that players seeking to raise those skills quickly by killing guards find an area with at least four guards, so as to always be able to fight at least one. Some areas good for this are the lobby of Varrock Palace which spawns 6 guards, and the northern entrance to Falador which spawns 5 guards, although are often populated by other players.

The old appearance of the Port Sarim guards, before they were graphically updated

A chathead of one of the Port Sarim guards from before the update
Click an image to enlarge
Retrieved from "https://runescape.fandom.com/wiki/Guard?oldid=22142190"
Community content is available under CC-BY-SA unless otherwise noted.