He tries to keep order around here. 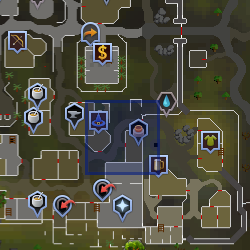 This guard is stationed in Varrock, east of Aubury's magic shop. He is found guarding the south-east members' section, that is blocked off by a gate running across its perimeter.

During the Biohazard quest, he will confiscate any vials that are to be delivered to Guidor, from Elena. To avoid this, they must be smuggled in by some people near the Chemist.

After the quest, he wears a protective suit.

Retrieved from "https://runescape.fandom.com/wiki/Guard_(East_Varrock)?oldid=24564220"
Community content is available under CC-BY-SA unless otherwise noted.