Start a Wiki
OS
For the head of the guards at the Clan Camp, see Captain of the Guard.
For the monster in New Varrock, see New Varrock guard captain.

Hand in the Sand

This guard looks rather drunk and has beer stains down his armour. 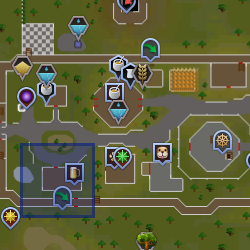 The Guard Captain (also known as the Captain of the Guard) is the captain of the Yanille army in the Dragon Inn who is extremely drunk. If players attempts to talk to him, he simply tells them to " Talk to tha' hand coz thish face ain't lishtnin."

Players must show him the Sandy hand during the Hand in the Sand quest. He then drops it into his beer, turning it into a beer soaked hand. The player will then have to show the hand to Zavistic Rarve.

Retrieved from "https://runescape.fandom.com/wiki/Guard_Captain?oldid=24563728"
Community content is available under CC-BY-SA unless otherwise noted.