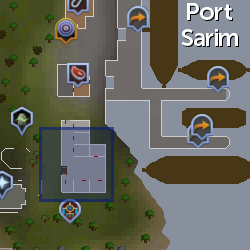 Guard Captain Roarkwin is the captain of the Port Sarim guards. When the slaver Jed attacked Port Sarim and took various jail prisoners as slaves, Roarkwin rallied his guards, including his champion Bennett, to fight the Skulls, though they weren't trained to repel pirate attacks.[1] He hired adventurers to defend the prison, either by repairing the lighthouse tower to stop it collapsing, loading the cannon on the roof with ammunition, and firing the cannon at the enemy ships. He paid them an initial 200 tokens, giving them more as they helped out. After the invasion was repelled, he moved to the jail itself.

Prior to Jed's invasion, he used to allow prisoners to work off their prison sentence by joining a ship's crew, but he discontinued that policy.[2][3] When he was approached about gathering a crew for the Sarim's Revenge, he suggested Evie Higgs, the brother of Jacob Higgs, one of the prisoners taken by Jed.

Retrieved from "https://runescape.fandom.com/wiki/Guard_Captain_Roarkwin?oldid=24565588"
Community content is available under CC-BY-SA unless otherwise noted.