The Guardians of Guthix are a group of creatures chosen by Guthix himself, who were his trusted and empowered companions while he walked the world at the end of the Third Age. As he headed to sleep, he assigned some guardians to guard important locations (in the case of Fiara, Juna, and Cres) or philosophies (in the case of Valluta, Death, and potentially Ocellus) of the Guthixian religion at the end of the Third Age. According to Mod Osborne, there were originally as many Guardians as standing stones in a druids' circle, totalling eight.[1] Some of the Guardians are blessed with great power and/or wisdom on Gielinor, greater even than some low-tier gods and divine beings.

Juna, the guardian snake of the Tears of Guthix.

Fiara, the earwig protector of the Fist of Guthix. 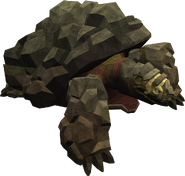 The Valluta, a powerful stone tortoise tasked with protecting threats from other planes.

Ocellus, an insane virius demon and founder of the Order of Ascension.

The Balance Elemental, created by fusing the Guardian of Guthix Aeternam with four of her allies.

Solak, the guardian of the Lost Grove

A Juna mural in Guthix caves.

A Fiara mural in Guthix caves.
Click an image to enlarge

Retrieved from "https://runescape.fandom.com/wiki/Guardians_of_Guthix?oldid=22288904"
Community content is available under CC-BY-SA unless otherwise noted.