A Shadow over Ashdale

An old but sturdy dwarf. 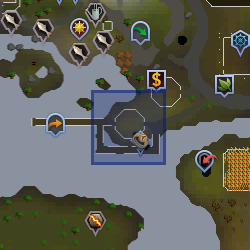 Gudrik Halbaddon is a retired dwarf adventurer who can be found east of Gerrant's Fishy Business in Port Sarim. He accompanies the player during the tutorial, and may take them back to Ashdale, should they desire to do so. He gives players a ring of potency should they lose it, and he also starts and finishes the quest A Shadow over Ashdale. Besides the ring people can also (re)claim their pathfinder armour as well as the journal entry and smuggler's journal from him.

He was an adventurer for over eighty years and claims to have explored "every dungeon, ruin and tomb" on RuneScape. He lost his left arm in a kalphite attack when he accidentally disturbed a hive in the Kharidian Desert.

After Morwenna the Cruel died, back in his adventuring days Gudrik plundered her tomb. He thinks this might have something with why she came back, and says he didn't know she might come back from the dead.

Retrieved from "https://runescape.fandom.com/wiki/Gudrik?oldid=26542250"
Community content is available under CC-BY-SA unless otherwise noted.