Guilded Eggstravaganza was a temporary holiday quest that was part of the 2019 Easter event. In the quest, the Easter Bunny tasks players with helping the Crafting Guild, Cooks' Guild, and Fishing Guild in a small Easter competition.

The Crafting Guild, Cooks' Guild, and Fishing Guild are participating in a competition that utilizes their unique specialties to show off the best way of celebrating Easter. However, the apprentices of the guilds are struggling and could use some assistance:

The player can help the guilds/apprentices in any order.

Talk to the Crafting Guild Apprentice, who can be found directly northwest of the Easter Bunny. She expresses how she doesn't think she's up to the task of representing the Crafting Guild in the competition due to an accident that injured her hands. After the player asks her if there's anything they can do to help, she asks if they can be her hands in order to complete the task.

Once the player agrees to help, the apprentice will ask if the player has previous experience in making eggs. The player assumes that she's asking about cooking eggs only to discover that she's referring to crafting an opulent egg, which she'll reaffirm with several adjectives. Ultimately, she'll say that what she wishes to craft is a gilded imperial egg. If asked what a gilded imperial egg is, she'll explain that it's made from a gilded base of purified gold with an enamel applied to it, and adorned with flawless gems.

The Crafting Guild Apprentice will explain how a gilded base can be crafted from purified gold. She'll suggest that 15,000 gold ore are needed which causes the player to panic. However, the Crafting Guild received a shipment of gold ore recently, so only a single gold ore is actually needed.

Additionally, she'll task the player with grabbing a pot of salt from one of the Cooks' Guild barrels. A pot of salt can be obtained by using the 'Fill pot' option on the barrel of salt directly east of the Crafting Guild Apprentice while having an empty pot.

Return to the Crafting Guild Apprentice with 1 gold ore and a pot of salt. She'll explain that the player must heat the ingredients using the nearby furnace. However, the gold must be heated properly. She'll give a silly range for the acceptable heat level and leave it up to the player to figure out. Use the 'Craft' option on the nearby furnace to begin heating the ingredients. The player must heat the gold twice in order to obtain the gilded imperial egg base. The player can choose to heat the gold several times, though doing so will cause the process to fail and start over.

Once the gilded imperial egg base has been obtained, the player must speak to the apprentice again.

The Crafting Guild Apprentice will explain that the gilded imperial egg base must now be painted with a verdigris enamel. She tasks the player with bringing her 1 copper ore and a bucket of vinegar. Similarly to the pot of salt, the player can obtain a bucket of vinegar by using the 'Fill bucket' option on the barrel of vinegar directly east of the Crafting Guild Apprentice while having a bucket.

Return to the Crafting Guild Apprentice with 1 copper ore and a bucket of vinegar. She'll take the items and, after some dialogue, provide an oxidised copper bar. She'll then explain that some pigment needs scraped off of the oxidised copper bar by using the nearby workbench, which must then be combined with crushed glass fragments, soaked ashes, and oxidised iron dust, and then finally put on the gilded imperial egg base. She'll provide the previously mentioned items when the dialogue is over.

Use the 'Craft' option on the nearby workbench to create an Unadorned imperial egg after some lengthy and humorous dialogue.

Present the gilded imperial egg to the apprentice who will be happy with the result. She'll show it to the Crafting Guild Journeyman who'll be thankful and award 200 crystallised chocolate fragments.

Talk to the Cooks' Guild Apprentice, who can be found directly northeast of the Easter Bunny. He'll be rather upset with himself as he's unable to create a cake masterpiece despite his self-described creativity and brilliance. He'll ask for help creating his cake masterpiece.

The Cooks' Guild Apprentice will mention that due to a shipping error, they have a crate full of luxurious lemons that could be used to make a lemon pie. He'll state that making a lemon pie will require an egg, a pie shell, and 1 luxury lemon. He'll also provide some instructions on making a pie shell.

Talk to the Fishing Guild Apprentice, who can be found southeast of the Easter Bunny. She'll immediately explain that the Fishing Guild wanted to create a 'swordsharkuna' for the competition. She'll amusingly describe how she simply likes putting things into other things. Unfortunately, after the Great 5th Age 'Poturducken' Incident, King Roald banned the creation and consumption of multi stuffed meals.

She suggests speaking to Ames the Courtier about putting a good word in for the Fishing Guild. Ames can be found almost directly west of the Easter Bunny. Ames panics when he connects the request to the similar Great 5th Age 'Poturducken' Incident. Fortunately, he says that a temporary repeal of the ban, only for Easter, may be possible if he receives help with his own request.

Ames will initially be confused about the bucket of flowers but is happy enough with them. He'll take a few flowers and leave the rest for the player. Showing his appreciation for having completed his request, he'll provide a repeal of royal decree for the Fishing Guild.

Return to the Fishing Guild Apprentice with the repeal of royal decree. She'll be appreciative and ask for help in creating the swordsharkuna. A silly, audio-enhanced dialogue will follow where the player will attempt to help the apprentice.

Unfortunately, the player fails to help the apprentice with the swordsharkuna. However, she states that she'll get another Fishing Guild member to help, and expresses thanks for the help by awarding 200 crystallised chocolate fragments.

Return to the Easter Bunny to let him know that all of the guilds have been helped. He states that it's time to pick a winner for the competition. However, he's unable to pick as he doesn't want to disappoint any of the guilds. Instead, he tells the player that the decision is up to them.

If the player tries to say that everyone is a winner, all of the apprentices will be upset and an individual winner must be selected. Ultimately, it doesn't matter which guild is selected as the winner. As the Easter Bunny reveals the prize, an egg, it begins making noises. The Easter Bunny declares that the player is now going to be a proud parent, and the subsequent dialogue causes some discomfort for the player. 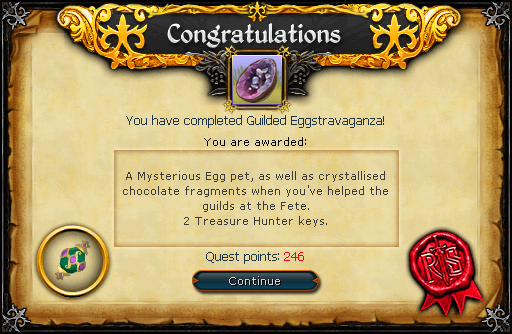