Start a Wiki
CSOS
Not to be confused with Darren Lightfinger.

Master of the Champions' Guild. 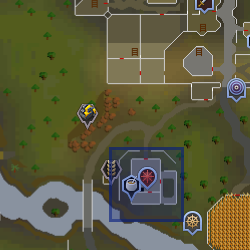 The Guildmaster is the leader of the Champions' Guild. He only allows adept questers entry to the guild, judging those with at least 33 quest points to be adept, which is equal to nearly every free-to-play quest point. When asked for a quest, he directs players to Oziach, who in turn asks them to become a Dragon Slayer. He gives some backstory relating to the quest and provides the maze key necessary to enter Melzar's Maze. He also suggests asking Duke Horacio for dragonfire protection and asking about Port Sarim for a crandorian ship.

Retrieved from "https://runescape.fandom.com/wiki/Guildmaster?oldid=24562316"
Community content is available under CC-BY-SA unless otherwise noted.