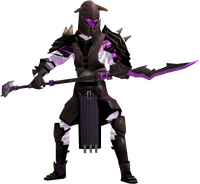 Guthan the Infested is the third oldest of the six Barrows brothers. He attacks with melee using his warspear. He attacks at a fairly average/slow speed, but despite this, he can still deal around 1000 damage per hit and should not be taken lightly, despite being regarded as one of the weaker Barrows brothers.

Guthan has a unique ability; Guthan's Infestation, which allows him to heal himself at a 1:1 ratio, so if he deals 500 life points of damage and the effect occurs, he would recover 500 life points. His effect is accompanied by an animation when activated; three ghostly entities surround Guthan's opponents then circle around them in an upwards motion.

He is also fought in Barrows: Rise of the Six.

Along with his brothers, Guthan lived on a farm and had a relationship with Isolde, a druidess. However, Ahrim killed Isolde out of jealously and mourning her supposed abandonment, Guthan went to the tavern and got drunk. He then got into a fight with Commander Jaycliff, killing him in the process. Fearful of the impending investigation and subesquent hanging, he went to the Mahjarrat Sliske and struck a deal with him - if all six brothers joined, Sliske would spare him. Guthan successfully persuaded his brothers to join, and as a result, was spared.

He and his brothers led a campaign into Morytania, where they all fell ill to a "sickness" and died. Sliske came and bound them to his service. Sometime after their deaths, Azzanadra had Sliske protect an icon, which he had Guthan and his brothers do. The icon was eventually taken by an adventurer who Azzanadra tasked with reclaiming it.

Guthan and his brothers appear as bobblehead workers in Sliske's chocolate factory.

Guthan takes part in Sliske's game, where his relationship with Isolde is revealed. Sliske has Ahrim navigate a maze of "righteousness", and Guthan appears before him with his love Isolde. If Ahrim was bathed in most of the flames, Ahrim asks the two for forgiveness; if not, Ahrim kills Isolde again and Sliske wipes Guthan of the memories he had with her. He also reveals to his brothers why he had them join the crusades (though Torag was planning to sign up anyways).

Guthan makes an appearance in Sliske's Endgame where he and his brothers rebel against Sliske due to the adventurer's actions in Kindred Spirits. They return to their crypts after Sliske is defeated by the adventurer.

Guthan's crypt is located at the south-east of the Barrows area, and he is weak to Air Spells. Strong magic spells such as Air Surge, Polypore Strike and Smoke Barrage are recommended when fighting him, however he can be taken down just as easily with strong melee weapons such as the Chaotic Maul. Guthan does not pose as much of a threat as his brothers do, with his set effect healing him instead of dealing extra damage or draining stats/adrenaline, but players should still be cautious and well-prepared when fighting him.

Guthan does not drop his main rewards directly; instead, his equipment is added as possible rewards from the Barrows chest. See Barrows#Rewards for more information. However, Guthan can directly drop the following items. 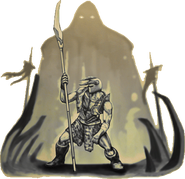 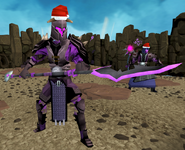 Shadow Guthan wearing a Santa hat during Christmas.
Click an image to enlarge

Retrieved from "https://runescape.fandom.com/wiki/Guthan_the_Infested?oldid=23452705"
Community content is available under CC-BY-SA unless otherwise noted.