Guthix's Cave is a large cave located a short distance west of the Legends' Guild and east of the Ardougne Lodestone. Before the quest The World Wakes it was the resting place of Guthix. It was discovered by Orlando Smith, and after the events of the quest, which take place in the cave, it becomes Guthix's shrine.

The shrine can be reached using the "Guthix shrine" teleport on the Sixth-Age circuit or the Modified diviner's headwear. The upper floor contains a Monument to Guthix, attended by the Guthixian High Druid, a druid, and a druidess. Chronicle fragments and elder chronicles can be deposited at the altar for Divination experience. Offering 100 chronicle fragments at this altar unlocks the "of Guthix" title.

The large lower chamber, which is reached by asking the High Druid for a teleport, contains about 30 Automatons which can be fought. This requires the quests Ritual of the Mahjarrat, The Chosen Commander, Branches of Darkmeyer, The Firemaker's Curse and The Void Stares Back; otherwise the druid will not teleport the player to the chamber.

The only way to leave the cave is by the elevator at the other side of the room the player came through, teleporting, dying, or leaving via the entrance.

The butterfly, which activates the security system.

The shrine at the end of the cavern. 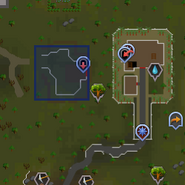 Retrieved from "https://runescape.fandom.com/wiki/Guthix%27s_Cave?oldid=22357009"
Community content is available under CC-BY-SA unless otherwise noted.