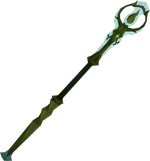 Guthix croziers are part of the Vestment set and can be found by doing level 3 treasure trails. To wield one the player needs at least 60 Prayer. The crozier is wielded as a staff in the weapons slot.