Start a Wiki
This article is about the hanged liar. For the Kinshra knight, see Guy (Kinshra).

Not your average garden feature... 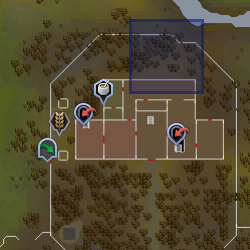 Guy was a man who was sentenced to death by hanging sometime in the past, his crime apparently been for telling a lie, although the scale of the lie is unknown. He is currently buried in a grave behind Draynor Manor, and his ghost occasionally appears on the Gallows he was hanged from, appearing for around a second. He cannot be spoken to.

Little is known about him, as the only information regarding him is the examine text of his grave; "Here lies Guy, he told a lie, so we swung him from the gallows high."

In Fairy Tale I - Growing Pains, his skull is found in his grave in order for players to find out how to kill the Tanglefoot.

Retrieved from "https://runescape.fandom.com/wiki/Guy?oldid=24563722"
Community content is available under CC-BY-SA unless otherwise noted.