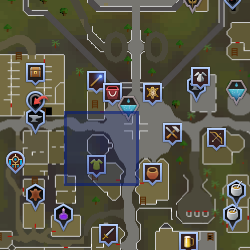 Gypsy Aris Maye is a gypsy who runs Gypsy Aris' Reward Shop in her tent in Varrock Square. The sign outside her tent has a large blinking eye. Gypsy Aris and her tent received a graphical makover on 15 December 2009.

She is involved in Recipe for Disaster and Dimension of Disaster, and has great knowledge about the history of Gielinor. She also has vast magical powers; for example, she casts a Tempus Cessit spell in the beginning of Recipe for Disaster to stop time. She serves as a member of the Secret Council of RuneScape, but arrives late to the latest meeting.

It appears she also has an inhuman lifespan. She claims to be seven times as old as the number of legs on the stools in the Blue Moon Inn, which would make her either 224, 266, or 364, depending on whether she is referring to the bar room only, the entire lower level, or both downstairs and upstairs, respectively.

She is a witness in the EVIL DAVE v. The People court case.

Retrieved from "https://runescape.fandom.com/wiki/Gypsy_Aris?oldid=21118001"
Community content is available under CC-BY-SA unless otherwise noted.