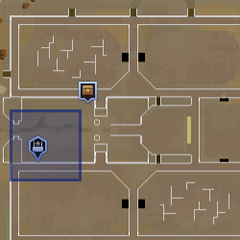 Hamid is a monk found near the altar in the centre of the Duel Arena. He is the answer to the clue scroll "Identify the back of this over-acting brother. (He's a long way from home.)" When spoken to while on this treasure trail, he will give the player a puzzle box to solve, before giving them their next clue or reward.

When not on a treasure trail, Hamid says he came to the Duel Arena to watch the nurses, which is slightly odd for a monk. He comes from the monastery north of Falador.

Community content is available under CC-BY-SA unless otherwise noted.
... more about "Hamid"
RDF feed
Is members only
No +
Store location
Duel Arena +