He looks quite independent in an aggressive and business like way. 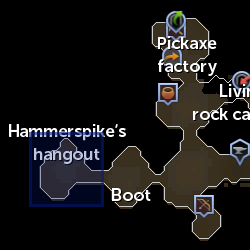 Hammerspike Stoutbeard is a dwarf gangster who plays a part in the One Small Favour quest. He is located in the most western portion of the Dwarven Mines. The adventurer approaches him to talk about Tassie Slipcast's debt, which he agrees to waive if they ask Sanfew to allow him to become a druid. However, he ultimately turns away from this wish and attempts to kill the adventurer instead, using his Dwarven gang members.

Towards the end of the quest, he pledges to get his revenge.

He also features as a hint in the 2017 Easter event, where the player needs to find the dwarf near him.

Retrieved from "https://runescape.fandom.com/wiki/Hammerspike_Stoutbeard?oldid=24562903"
Community content is available under CC-BY-SA unless otherwise noted.