A servant of the Duke of Lumbridge 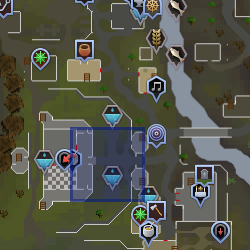 Hans is the servant of Duke Horacio[1] and can be found walking in circles around the Lumbridge Castle courtyard. He is the oldest non-player character in RuneScape[2], and RuneScape veterans can claim Capes of Distinction from him, which indicate the age of their account. Despite being a veteran, he is easily scared, screaming and running away in fright when threatened.[3]

When spoken to, Hans will tell the player he's been patrolling Lumbridge Castle for years, to which the player will respond saying he must be old. Hans then goes on to say he is a veteran of RuneScape and at this point will offer the player the option to buy the Veteran cape if they have the requirements. If they do not have the requirements, he will tell players how much longer they have until they may buy the cape.[4]

Hans also plays a role in a couple of Treasure Trail clue scrolls, one being an anagram (Snah = Hans), and the other a cryptic (which also has "Snah" in it).

Hans can also be spoken to by selecting "random contact" on the NPC Contact spell. If Hans is contacted, your character will claim you are a knight coming to kill everyone in Lumbridge Castle. Hans panics in response.

The capes are sold together with a hood.

Retrieved from "https://runescape.fandom.com/wiki/Hans?oldid=24562171"
Community content is available under CC-BY-SA unless otherwise noted.