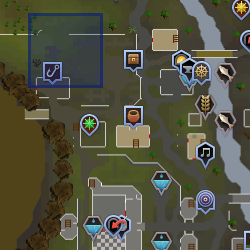 Harlan (previously named Melee instructor) is an assistant of Lady Deathknell. He can be found in Lumbridge in the Combat Academy, located north of Lumbridge Fishing Supplies shop. As the master of Defence, he sells the Defence cape and hood for 99,000 coins to members who have achieved skill mastery in Defence, and the Master defence cape for 120,000 coins to those who have achieved 104,273,167 experience in the skill.

He used to give new players a training sword and a training shield to those who asked for it, but this feature was removed on 17 September 2009.[1]

The rewards are unlocked automatically when the required number of points are obtained. The points are not deducted when a reward is unlocked.

Retrieved from "https://runescape.fandom.com/wiki/Harlan?oldid=24562458"
Community content is available under CC-BY-SA unless otherwise noted.