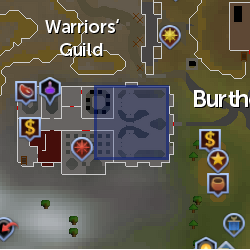 Master of the Warriors' Guild.

Harrallak Menarous is the owner of the Warriors' Guild, and can be found in the main hall. Harrallak is allegedly a professional duellist who is a master of the rapier. If players ask him to fence, he will decline, saying he "doesn't want to harm you" and that it would "ruin his reputation."

The Warriors' Guild is located in the west side of Burthorpe, north of Taverley, and south of the Death Plateau. To enter, player's attack and strength levels added together must be equivalent or greater than 130, or have a level of 99 in either Attack or Strength.

Harrallak has a small role in the While Guthix Sleeps quest, belonging to a collection of eight warriors that attempt to save the player from the fortress of Lucien after the player's identity is compromised. He is one of two fighters (along with Mazchna) to survive the ensuing battle. However, he appears to be gravely injured as he teleports away from Lucien's camp.

After that part of the quest, he can be found at his normal spot in the Warriors' Guild. He admits that he misses his fellow Warrior Guild counterparts whom he lost in the battle with Lucien. He also claims that he would be willing to fight by the players side to avenge their deaths when the chance arises again. However, he plays no part in Ritual of the Mahjarrat and is unaware that Lucien is finally killed until an update on 13 March 2012.

Retrieved from "https://runescape.fandom.com/wiki/Harrallak_Menarous?oldid=24562807"
Community content is available under CC-BY-SA unless otherwise noted.
... more about "Harrallak Menarous"
RDF feed
Is members only
No +  and Yes +
Store location
Warriors' Guild +  and Chaos Temple (hut) +