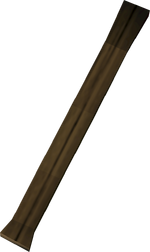 Hatchet handles were items created through a random event that caused axe heads to fly off while Woodcutting. This event was removed in an update in July 2007, but a similar event that affected pickaxes remained. When they were removed from the game, axe heads and handles were either re-attached[source needed] or deleted entirely.

The random event which caused axe heads and handles was removed by Jagex after much negativity from players on the forums. Many were upset over the fact that dragon hatchet heads, worth a few million, could fly off and be lost if the player was not paying attention or had connection problems. The events also caused many annoyances as other players picked up the handle or head, often trying to sell it back to the original owner. Incidents such as this contributed to the eventual removal of this event. Originally, this item could not be re-equipped once it was unequipped, however this was changed at some point[source needed].

Retrieved from "https://runescape.fandom.com/wiki/Hatchet_handle?oldid=24535673"
Community content is available under CC-BY-SA unless otherwise noted.