The Heimland Games were a set of activities that players could take part in with their friends in the Land of Snow. Sections include ice skating, snowman building, snowball fights, and even seal sliding. To get there you must step into a Christmas cupboard or be teleported there by Thorvar after completing the 2010 Christmas event. This activity was released on 20 December.

Some people from the world of Gielinor were also there, including a drunken Sir Amik Varze, Manni the Reveller, Olaf the Bard, Brundt the Chieftain, Swensen the Navigator, Thorvald the Warrior, General Wartface, General Bentnoze, Thok, Master of Dungeoneering, and the Rewards trader, Marmaros.

In this game, you collect the snow then build your snowman and it goes and walks around. One can also use their snow globe from the 2007 Christmas event to quickly create a lot of snow for building.

You need 31 snowballs to build a complete snowman (10 for the bottom, 6 for the middle, 4 for the arms, 11 for the head). The Heimland Games snowman comes to life once the 31st snowball is added, and it will move around the fenced enclave of snow, on rare occasions even venturing just outside the fenced area. There was a glitch, when two people add the last snowball together, there is a chance that 2 snowmen will come out of it.

Ice skating is another activity in the Heimland Games. It is easy: just click around the rink and skate. It is occasionally used for games of tag between players.

Another game you can play while in the Heimland Games, is snowball fight. Just gather snow and click "throw" then click a player. You can also take them outside the portal. But they may "melt" after the event is over. You can also use your snow globe from the 2007 Christmas event to rapidly restore your snowballs. Throwing without clicking the throw marker does not score.

Location: Through the east gate. Like during the third room of the 2010 Christmas event, you can slide around as a seal. You also have the ability to score points, with different end markers having different values. There are three runs, and the respawn is by the middle one.

This activity returned for the 2016 Christmas event, rewarding Dungeoneering and Agility experience for every successful run. Players can access the event by stepping through the Christmas cupboard next to Thorvar Crittersmash after completing the first three Quest Episodes. 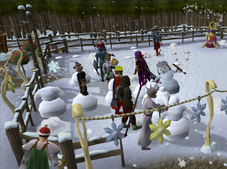 Retrieved from "https://runescape.fandom.com/wiki/Heimland_Games?oldid=18911373"
Community content is available under CC-BY-SA unless otherwise noted.