Vermin from the underworld. 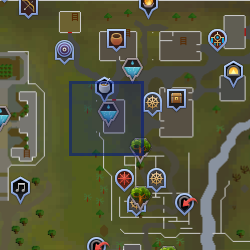 Hell-Rats are found in Evil Dave's basement in Edgeville and can only be accessed after starting Recipe for Disaster: Freeing Evil Dave. Hell-rats are caught by having the player's cat chase and catch them, just like normal rats. Catching hell-rats will earn credit toward the cat training medal. However, hell-rats cannot be placed on a rat pole. After a cat or kitten manages to kill a hell-rat, it will become a hellcat or hellkitten. The cat may be changed back to normal by feeding it milk or by talking to Dave's mother. A full grown cat has a much higher chance of success at killing hell-rats than a kitten has.

When successfully caught, the rats always drop ashes and a random spice. The spice will have 1 to 4 doses and may be red, yellow, orange, or brown. These spices may be mixed with stews to create spicy stews.

During the Recipe for Disaster quest, Evil Dave states that he is trying to raise a demon army and had tried to start off small with imps. However, Evil Dave ended up with hell-rats, which were supposed to be the lowest form of demons.

Retrieved from "https://runescape.fandom.com/wiki/Hell-Rat?oldid=24562213"
Community content is available under CC-BY-SA unless otherwise noted.