The mightiest bow of the Wilderness.

The hellfire bow is a powerful bow that players can wield at level 90 Ranged and does not require ammo. One Hellfire bow per world appears somewhere on the ground in the Wilderness, including the portion of the Edgeville Dungeon that is in the Wilderness, visible to all players and with a large golden loot beam on top of it. The beam's appearance is not affected by the player's loot beam settings. If the bow is taken a smaller loot beam may persist in its original location.

Whilst in the Wilderness, players can operate any of the Wilderness swords to locate the bow. This produces a message indicating the general area it has spawned in, for example: The sword pulls towards the north-east area of the Wilderness! (The northern Wilderness is considered to be level 25 or greater.)

When a player is holding the bow, using the locate function will only say that a player has the bow. Instead a message will periodically be broadcast to players on the same world who are also in the Wilderness. For instance, the following message could be a broadcast: Player has the Hellfire bow in level 47 north-east Wilderness! A red marker is also shown under the player carrying the bow. The person carrying it sees the message: Carrying the Hellfire bow has informed other players of your current Wilderness level!

As well as alerting all players who are on the same world and in the Wilderness to the player's location, carrying the bow will also override normal multi-combat and level restriction mechanics. Players of all levels will be able to attack the wielder of the bow without restriction based on Wilderness level and on top of this the wielder can be attacked by any number of players simultaneously, regardless of whether they are in a multi-combat area or not. These mechanics make the bow relatively dangerous to wield.

It disappears if you leave the Wilderness (it will disappear if you go into the safe strip just north of the Wilderness wall), and cannot be keepsaked. Imp-in-a-box would refuse to bank it, and Telekinetic Grab cannot be cast on it.

It cannot be obtained on a Bounty Hunter world.

As it is freely obtained, does not require ammo, and has extremely high stats, it is popular for combat within the Wilderness, such as player killing, Slayer assignments, killing the Chaos Elemental or the WildyWyrm.

Logging out or entering the lobby will force the player to drop the bow. Leaving the Wilderness makes the bow appear in one of the following locations. Note that players may also drop the bow, so it can also be found in other locations. 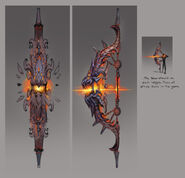 Concept art of the Hellfire bow
Click an image to enlarge

Retrieved from "https://runescape.fandom.com/wiki/Hellfire_bow?oldid=24559399"
Community content is available under CC-BY-SA unless otherwise noted.