Are you sure you wish to destroy this item? Members can reclaim it from Diango in Draynor for a return fee of 1,500 coins. No progress will be lost!

A helm that displays your dominance over banshees. Requires Defence (15). 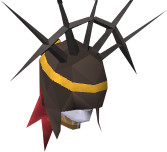 The Helm of Keening is the result of killing 200 Banshees with the Mask of Mourning, which is won from the Treasure Hunter. It requires 15 Defence to wear.

The emote
Retrieved from "https://runescape.fandom.com/wiki/Helm_of_Keening?oldid=24548403"
Community content is available under CC-BY-SA unless otherwise noted.